I have nothing interesting to write about. There is a pilgrimage to some holy shrine or another that has got the Hajjis all excited; it is causing a lot of traffic, making it hard to get around, and impossible to get anything done.

In fact, I did nothing today. Seriously, not one stitch of meaningful work – sometimes, when I’m screwing off during the day, I’ll at least turn to my computer and click the mouse a few times when Major X rolls through; today I even quit doing that. I did the crossword, opened a package from my wife, read most of this month’s GQ, and went to the gym. At one point, Major X said “I don’t know about you EWO.” In response, I momentarily looked up from my magazine, decided I had no idea what he was talking about, and looked back down. He is a confusing person.

A few days ago, he told me I was supposed to be the morale officer; I replied “really, I had no idea.” I don’t know why he thought I was supposed to know that; in fact, I have been under the impression that the Army is completely opposed to morale. Regardless, I have embraced my role, and as my first order of business, have instituted a daily mass, morale-spewing e-mail: in honor of the 2008 Olympic Games, I have chosen to make the theme “Olympian of the Day,” and have been sending out pictures of Olympians, past and present, which happen to be extremely hot. Tomorrows Olympian is Ana Paula Connelly, a magnificent beach volleyball player from Brazil. Picture included. 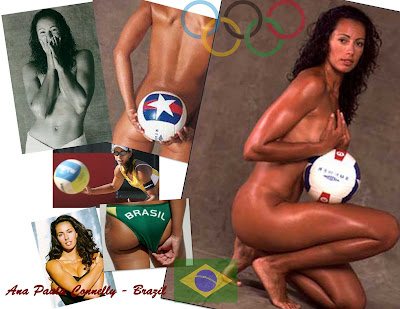 The Olympian shtick has been very well received by the Battalion; I take pride in my work.

This bickering on the message boards amuses me; especially since I know the true identities of all the participants, though they are anonymous to one another. I feel so God-like and powerful.

I did get my leave chit in today; I had been trying hard not to think too much about leave, but now that I put in the request, it is the only thing I think about. I ache for it, I can’t wait to go home – wife, dogs, beer, regular clothes, comfortable bed, real food; in that order. Some of the guys have gone on their leave already, and as they come back, refreshed yet more depressed than ever, full of stories of drunkenness and fornication, I want to punch them. How dare they enjoy themselves whilst the rest of us are stuck here with the sandstorms and the stinky Muj?

Quote of the Day:

Is it wrong to be overly interested in olympic female gymnastics? I mean, when to poor things fall of the balance beam it is so sad; now I need TWO tissues...

you should be the more-anal officer instead.

nice pics Mr. Augmentee. Bet you'd like to get a hand on those hoo-ha's

I am a microwave. I was discovered by NASA. People cook in me. Sickos put small animals in me. Estelle Getty & Bernie Mac stood too close.

Mark Paul Boskschitz cooks his juevos ranchevos in me. He bought me for $69 from Wal-Mart. He, or his sub-human bride to be, have yet to clean me.

I am a microwave.

Quick Q, which may lead into another Q: Major X doesn't scare you?

You're my morale officer. You can lift my spirits and give it a wet handy anyday! And by "spirits" I mean my gunt.

Love (newly out of the closet for good this time! no seriously!),

P.S. Please think about us!

P.S.S. Tom's really out of the picture! No, seriously this time, you guys!

This message board is out of control - I don't even know who everyone is anymore.

I may have to change the URL soon, we are picking up strays.

Dear Mr. Berkeley,
Jesus. You could possibly be the worst commenter I've ever read. You should be mopping up the video booths at PeepWorld. Do the world a favor and just hang yourself. I hope for the fate of mankind you don't spawn another stuttering pimple with your sub-human wife. Besides, I think you're gay anyway.
Go menstruate!
-Bowl

augmentee - any thoughts on who will be a guest contributor in your drunken absence?

Just because you look exactly like Tony Kornheiser doesn't give you the right to rate writing/commenting skills. What does give you that right is what we, in Berkeley, have historically accomplished within the realms of politics and social values. It's because of Berkeley that I am better than you in everything and your jealousy displays itself time and again in these comment sections. Everyone agrees with me.

I Actually Had Sex With Tom Selleck

Here, our skilled groups have infinite capabilities to help support your rising business. Understanding CNC machine cycle time will help you estimate machining costs and lower product lead times. Knowing machining cycle times can also help you evaluate two or more totally different processes that will work finest for a project. Often the lowest complete cost best toddler gloves requires balancing costs of casting and machining. For instance, removing solid inventory might scale back machining however improve fallout from porosity. In steel manufacturing, solid components straight from the mildew most often require machining to be prepared to make use of.