Well, it sure has been a while; sorry about that. The truth is I have been really busy.

First, I was making a totally awesome video for Bosk’s wedding. I planned it with his brother so that it would look like we were having a live conversation during the Best Man speech. I shot it through NVGs, and added a few effects for extra coolness. I bantered with the Best Man for a little, pretended like I could see the bride and groom, and made a little toast. Everyone said it was smash hit! I was so happy to have been able to steal some attention for myself even from way over here. I laid awake almost the whole night Saturday feeling sorry for myself – I wanted to be at that wedding so much, and even now it makes my stomach turn to know I missed a kick-ass party. I am happy for Bosk and Lady Bosk though; I guess.

Second, I have really buckled down and taken my role as Morale Officer very seriously. After an extremely successful series of twelve Olympic babes, I have shifted my focus to the upcoming football season and started a new Football Match-up series of morning e-mails. They are wildly popular – an example is below. 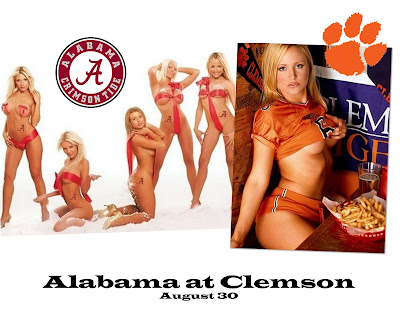 AAFES has begun wiring the FOB for high speed internet access. It is expensive, but it is fast, so I can’t wait until they reach my building. Once I am set up with some decent internet, I’ll post my daily morale pictures on another page with a link (Pride, I need another page with a link – sans the naked men if possible). The morale picture takes up a lot more time than ought to, but I like it and so does everyone else, so it’s worth it. The problem is, I can google “Cheerleaders,” and I will get a lot of decent images, but I don’t want to pigeon-hole the thing into just “cheerleaders of the day,” but more of a celebration of the entire female student body. If you google the word “coed,” you are directed to 3 million porn sites – which while entertaining, are unfit for official U.S. Government e-mail, and is actually a violation of General Order #1 along with no drinking. I would be worried that Army authorities would be kicking down my door any second now for all the “accidental” porn hits, but they’re busy trying to catch Hadjies. Anyway, it takes a lot of searching to put together a product of that quality.

Third, the thing that takes up the most of my time away from work is the gym. I have leave coming up, and I want to be shredded like mother-fucking Bruce Lee when I get home. I’ve been working out pretty hard for five months, and I am very studly; but not quite Bruce Lee territory. Someone sent me a box of delicious baked goods today, which set my progress back several days as I greedily consumed a massive amount of brownies and cookies.

To help me along, I ordered a cool $240 worth of supplements today, despite the advice of the Jewish friend, who is in fact a doctor although just being Jewish is good enough for me as far as medical advice is concerned. He is actually the only Doctor I ever consult (unless I need drugs); I routinely disregard his counsel in flagrant and fantastic ways. The $240 is mostly protein, which I ordered a three month supply of, but also includes a bunch of Hydroxy-Cut and the like, which will lead to the realization of my fitness goals, or kill me – only time will tell. I am really hoping not get kidney stones.

Well, I hope you found my excuses satisfactory. I apologize for neglecting you, and I will come through with another story this week.

The Augmentee: I dream about being on an Aircraft Carrier.

Army 1LT: Is being on an Aircraft Carrier better than being home?

The Augmentee: (Pause, confused look) No Idiot, it’s just better than being here with you.

It was the highlight of the wedding day, besides losing my virginity. Thanks. I just wrote you a more detailed and personal email. Everyone loved it. When you were on, it was so quiet you could have heard a Jew drop!

But what you will never, ever, ever hear is a Jew drop a penny.

The cheer for the augmentee might have been louder than the announcement of the new bride and groom.

was that a wedding I was at or a hippy-rehab convention?

Before I ever knew Clemson existed I had heard the term "Crimson Tide", the way I heard it was as a euphemism (20 pts for big word)for when....you know a woman's time of month. So every time I see hot chicks wearing Crimson tide gear or posing as they are on your post I can't believe they would still go with that name. I'm sure its just me being a sick bastard. Anyone know how this name came about for Clemson?

turn the heavy metal off for a second and listen a bit closer on Saturday mornings to the boys from gameday....Clemson are the Tigers and Alabama is the Crimson Tide

In today's age of Google and Wikipedia, there really is no excuse for you fucking up that whole post.

Damn! I knew I should have proof read that comment before posting!

I know you wished you were there for the ceremony, and we all missed you, so let me provide you with a brief recap of the number of occurences for each word during the rabbi's speech:

Hope this makes you feel like you were there.