The new Navy Working Uniform (NWU) has been the talk of the town for quite some time in Navy circles. For as happy as most Sailors are to wave goodbye to the idiotic dungarees and the awful wash Khaki uniform (RIP “Johnny Cash”); all are summarily disgusted with the senselessness of the new blue/gray camouflage pattern. The only reasonable explanation I’ve heard for the color scheme is that it will hide paint splatter better than old working uniforms – which seems like a pretty stupid reason to change a uniform.

The cover article in the January 2009 edition of Navy Times features Sailors’ “outrage” over the NWU rules; specifically, that like current working uniforms it is not authorized for wear anywhere off base. However, current working uniforms are authorized for routine stops (gas, milk, pick up kids, etc.), where as the NWU rules specifically prohibit such stops until such a time as “the Chief’s mess is confident proper standards of wear are understood and practiced,” A time I am certain will never come. It’s a long article, and it isn’t particularly interesting or essential to the main argument of this post, but the point is that everyone hates this uniform.

What has not been pointed out yet, at least not in print, is this “Augmentee Exclusive:” This piece of crap looks EXACTLY like the uniform of the Iraqi National Police! 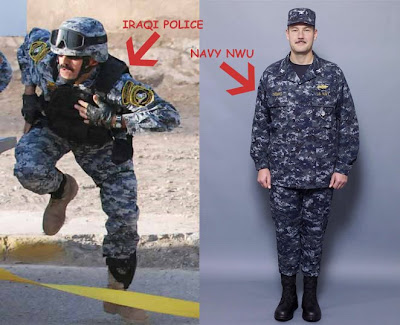 See the conclusive photographic evidence. No word yet on whether or not the creepy mustache is required; if it is, the Iraqi Police costume will be complete. Maybe we should all quit showering and we can start sleeping outside in disgusting little “man-piles” too. If and how this embarrassing little coincidence escaped the attention of whatever pentagon brain child who gave birth to this bastard uniform, I will not ever know. Perhaps we are showing our solidarity with our Iraqi allies by dressing ourselves exactly like the most corrupt and ineffective arm their security forces – that’s good for morale, I look forward to being harassed mercilessly forever by the other services, even the Air Force’s ridiculous “Tiger Stripes” are less goofy than this abomination.

Now don’t be in a hurry to toss out your old Woodland and Desert Camouflage uniform. That uniform is not being retired, but instead is being re-designated as “organizational clothing.” What does that mean? It means that it is considered clothing issued by Commands in order to do a specific job, same as a flight suit. It would be my guess that most units deployed on the ground in Iraq or Afghanistan will choose to wear the old BDUs, but the uniform you wear is at the mercy of the whims of your unit’s commander – so keep your fingers crossed.

What does this mean for deploying IAs? This blog is still about IAs right? Well, if you are going to be embedded in an Army or USMC unit, you can expect to wear the Army ACU or USMC digital cammies – so keep your fingers crossed for that. If you go to a Navy or a joint command, I don’t know what to tell you. It’s up to that unit’s commander, and I have no idea if you will be issued NWUs for service in Iraq or Afghanistan.

Look on the bright side; if you are forced to wear this smurf suit in country, at least you'll be less likely to be "accidentally" shot by an IP, which is actually a legitimate fear, because as alluded too earlier, these guys are a fucking clown-show. I was very nearly run over by a drunk IP in a Suburban while walking across ASR Jackson one time, but that's a story for another day. Maybe he would have made more of an effort to miss me if I was dressed like his cousin. But then again, maybe not.

The roll-out has begun; it ends December 2010 so get to your local NEX. Don’t forget your Service Dress Khakis and enlisted Khaki uniform while you’re there, and you better get started on that mustache.

Posted by The Augmentee at 6:29 AM

Man-pile! Hilarious and horrible all at the same time. I don't ever want to be in a man-pile. my word verification is 'wingull'

these pretzels are making me firsty!

word verification: get a life (and a wife who's not disgusted by your mere presence, bowl)

these pretzels are making me thirdsty!

these potato chips are making me fourthsty!

Joge-Imeeds drank a fifth of vodka and passed out on the skeeted-on toilet seat. hence, the pregnancy.

we can only hope the navy-required hitler mustaches don't offend the 3 or 4 jeffish people.

I can't beleive you don't see the value in theis uniform. If you fall overboard on a ship you blend seemlessly into the blue sea. This way sharks, pirates, and potential rescuers will be unable to loctate you, leaving you to contemplate you watery grave in solitude.